The story is told to us from, apparently, a mental institution, where our narrator Arletty (Marianna Hill) alludes to a terrible experience she’s undergone in the beachside holiday town of Pointe Dune (formerly known as New Bethlehem) – and suggests that whatever horror overtook the town is spreading outwards, and perhaps soon nowhere will be safe. Arletty’s father Joseph Long (played by Royal Dano, largely in voiceovers narrating Long’s letters and diaries), an artist, maintained a studio in Pointe Dune where he could work in solitude; Arletty received a strange letter from him, at once suggesting he was in terrible danger but urging her to stay away and not get involved, or seek help. 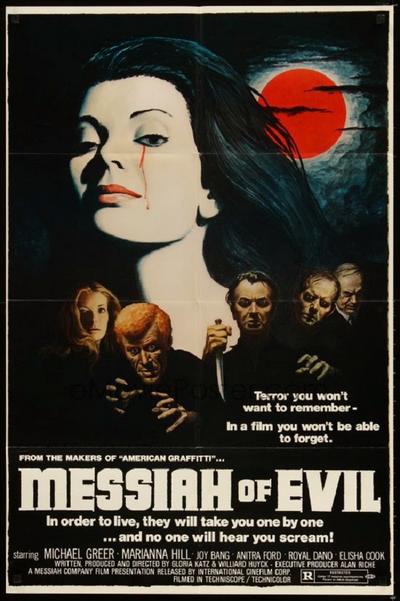 As she pulls into a gas station just outside town, she looks over to see the twitchy attendant (Charles Dierkop) shooting his pistol out into the darkness; when she comes over, they both hear a terrible yelp in the darkness, and his claim that it’s just stray dogs fails to convince her. We see certain other terrible things suggesting that the attendant is keeping a whole swathe of secrets, for fear of what the Pointe Dune residents will do to him, with the result that we see pretty unambiguous indications that everything is fucked long before Arletty does. It’s too late though – he’s been seen talking to her, and as she makes her initial investigations into Pointe Dune, the attendant is… dealt with.

That’s just the start of the nightmare, as Arletty learns of the past of the town – a town which used to be called New Bethlehem, before the Moon turned red one night and a mysterious stranger came from the sea to change everything, with a promise of returning some day. Just what has happened to our narrator’s missing father – and what horrors are heralded by the second coming of this Messiah of Evil?