Michael Powell’s Peeping Tom out in 1960, but aesthetically and thematically feels like it could have emerged 5-10 years later and still been ahead of its time. Mark Lewis – he isn’t specified as being German in the script but actor Karlheinz Boehm doesn’t exactly go all out to disguise his accent – is a quiet, withdrawn young man who lives in the upper floors of the family home he inherited from his late father. Lewis Senior was a brilliant scientist who conducted a range of experiments of a dubious ethical nature on Mark from birth onwards, recording almost all of them on film. Having caught the shutterbug fever himself after receiving a handheld film camera from dad – a princely gift for a child of his age – Mark has grown to structure his life around the camera, converting dad’s old laboratory into his own personal darkroom. He’s landed a day job as a cameraman in a respectable movie studio and dreams of one day being a director; until that day, he earns a bit of extra scratch shooting pornography for sleazy newsagents to sell under the counter. 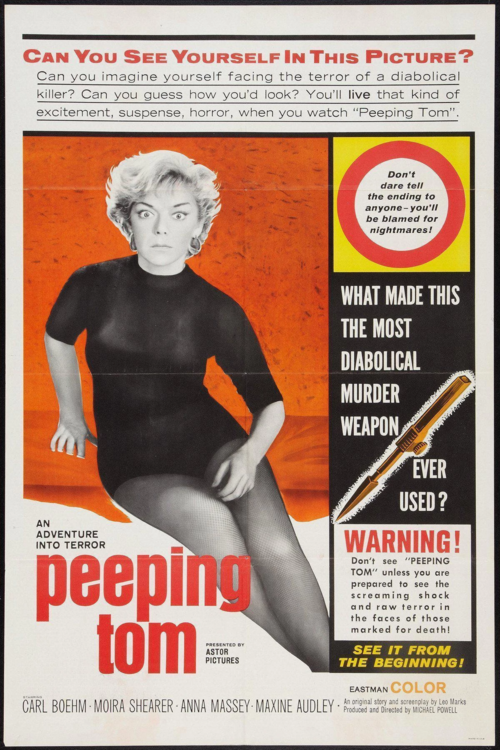 But that’s not all that he’s up to. Lewis’ father experiments revolved around the biological basis of fear. His textbooks line the walls of Mark’s study – and Mark himself is conducting his own investigations into fear, not on a scientific basis but on an artistic, aesthetic basis. You see, what gets Mark’s blood moving of an evening is stalking, trapping, and murdering women – and recording the process. Meanwhile, his young downstairs lodger Helen Stephens (Anna Massey), on discovering that her landlord is this handsome young gentleman, is quite keen to get to know him better – even though she spots the occasional red flag in his behaviour, and in the curious home movie he shows her of his father’s fear experiments on him. As Mark works to complete his personal documentary on fear, will Helen find herself in a starring role?