James Blish doesn’t get nearly enough love these days. Stroll into any bookshop and the most you are likely to find of his work is the SF Masterworks reprints of the somewhat inconsistent Cities In Flight and the renowned A Case of Conscience. It’s difficult to say for sure why only these two books are considered worthy of keeping in print, but a big clue lurks in many second-hand bookshops: from the late 1960s until his death in 1975, Blish had the honour of producing official novelisations of Star Trek scripts. There’s a certain kind of literary elitism which looks down on people who write adaptations of films and books, and while I’m not sure that’s always fair I think it is somewhat justified in Blish’s case: the beginning of his Trek books coincided with a sudden drop in the quality of his independent output – aside from the twinned novels Black Easter and The Day After Judgement, which together comprise the third part of the After Such Knowledge trilogy, from 1968 onwards none of Blish’s output is considered to be especially gripping or important by SF critics and fans. Perhaps Blish found that Star Trek novelisations were such a tempting prospect (heck, any official Trek tie-in is a licence to print money) he didn’t feel the need to try anymore, or perhaps the demands of cranking out 12 collections of Trek stories in 8 years was simply too draining. 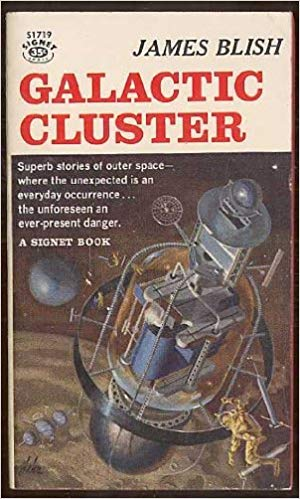 The blame can’t be entirely pinned on Star Trek, however. Blish could be entirely capable of being mediocre on his own. Galactic Cluster, published in 1960, is a collection of early short stories by him, and while they aren’t exactly bad they’re not of the high standards that we know Blish could produce, and as such they are frustrating. Many of them seem to be on the verge of exploding into genius but never quite doing so – the sole unflawed gem is A Work of Art, a brilliant account of the apparent resurrection of Richard Strauss in 2161 and what happens when he tries to write music again. It is here that Blish manages to ask big, important, meaningful questions, as he does in his best work, while at the same time producing interesting and well-written hard SF. Blish can more-or-less handle characterisation, when he can be bothered, has a firm grasp of the scientific theories of his time and contradicts them interestingly and consistently, and displays more intelligence and thoughtfulness in his philosophical musings than anyone else writing in SF at the time. (To put things in context, J.G. Ballard and Philip K. Dick was still warming up at this point in time, and the likes of Asimov, Clarke and Heinlein were the big names in hard SF.) Blish, by rights, should have been huge.