END_OF_DOCUMENT_TOKEN_TO_BE_REPLACED

If you’re fond of a good feud, the videogame landscape of the mid-1980s to mid-1990s were a golden era for them. Nintendo vs. Sega is the classic one, not least because Sega went out of their way to bait and belittle Nintendo in much of their advertising; the Amiga vs. Atari ST feud was perhaps overstated by the media at the time but there was undeniably a bit of smoke to that fire, not least because of the intertwined personalities involved in the development of both systems. 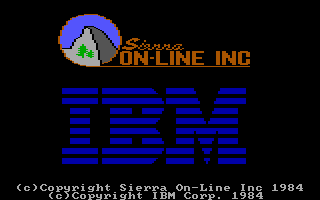 For fans of graphical adventure games of a certain age, of course, the Sierra vs. LucasArts question is particularly memorable. It’s an open question how much of a genuine feud it was as far as the individual personalities concerned. I’m unaware of any actual personal rancour between the two studios, though Ron Gilbert’s famous Why Adventure Games Suck manifesto which yielded the guiding principles behind classics such as The Secret of Monkey Island was certainly taking issue with a lot of issues regarded as being distinct hallmarks of Sierra games, and Gilbert even snuck parodies of the infamous Sierra “You have died” messages into The Secret of Monkey Island itself, but I’m unaware of any return fire from Sierra itself. Indeed, a lot of the negative aspects people associate with the Sierra house style – arbitrary deaths, illogical puzzles, the possibility of putting the game into an unwinnable state, and so on – were most endemic in their early games.

In previous GOGathon articles I’ve looked at the Gabriel Knight and Phantasmagoria series. Notably, death is still possible in both of them, and I’ve come around to the idea that “can’t possibly die” isn’t necessarily a rule which should always be applied to point-and-click adventure design; it was fine for most of LucasArts’ works, which tended to be comedic in tone anyway, but slavishly following LucasArts’ lead without understanding why they did what they did would be just as bad as doing the same for Sierra, and in a horror-genre adventure it’s arguably preferable to have death be possible (and therefore a source of tension) than have a situation where the player can just sit wander about endlessly without progressing anything and never get into any real danger, which will kill tension quickly.

END_OF_DOCUMENT_TOKEN_TO_BE_REPLACED

Back in the 1990s, when point and click adventures were all the rage, I was very much in LucasArts’ corner when it came to their rivalry with Sierra for the critical and commercial top spot in that subgenre, and on balance I still think LucasArts had the edge in terms of quality. But thanks to GOG’s reasonable prices and effective emulation, I’ve been tempted into dipping into some of the old Sierra classics anyway. Previously I’d dipped into the Gabriel Knight series; sticking with the horror genre, I’m now going to give the (violent, sexualised, regularly subject to bans, regularly dealing in triggery subject matter like rape and abuse and mental illness) Phantasmagoria series a whirl. Hold my hand in case I get scared, won’t you?

END_OF_DOCUMENT_TOKEN_TO_BE_REPLACED

In their peak years in the 1980s and 1990s, adventure games – both of the text adventure and point-and-click variety – liked to make a big virtue of the writing and dialogue which went into them – for instance, the term “interactive fiction” was applied to text adventures to stress their literary qualities. Of the major publishers of the point-and-click era, Sierra by far went the furthest with this by presenting the lead designers on their game lines in a manner akin to bestselling authors; from Roberta Williams’ positioning as the creator of the King’s Quest game onwards, each series tended to be strongly associated with a particular lead designer who was presented as an auteur, to the point where it wouldn’t be unheard-of for said designers to convert their game scripts into novelisations.

Jane Jensen had joined Sierra after leaving a systems programming job at Hewlett-Packard, seeking a more creative role. At first she cut her teeth as an assistant writer on various projects, including co-writing King’s Quest VI: Heir Today, Gone Tomorrow with Sierra chief Roberta Williams – and given that this was arguably Sierra’s flagship series and was closely tied to Roberta’s name, that suggests that Sierra management thought highly of Jane’s capabilities. When you came into the top flight of writers at Sierra, your own series wasn’t far away, and Jensen was duly given her own series to head – Gabriel Knight, a series of occult horror mysteries in which the titular character goes to various atmospheric locations and uncovers a range of historical mysteries.

By this time, the “modern-day character investigating a mystery with historical roots in a location rich in architectural and landscape eye candy” genre has become well-ploughed territory in point-and-click adventures – it’s the premise of the Broken Sword, Secret Files and Post Mortem/Still Life series, for instance – and you could make a convincing argument that the Gabriel Knight games are at least in part responsible for this boom, as well as setting a new bar in Sierra’s efforts to present adventure games with complex, grown-up storylines and content rather than the more cartoonish efforts adhered to by most other developers. Thanks to GOG, the entire series is now available to all – making it a perfect subject for a GOGathon.