(Content warning for this series: over these two articles I’m going to touch on sexual abuse, mental health issues, suicide, and Gamergate. If you aren’t up for such subjects, maybe skip these.) 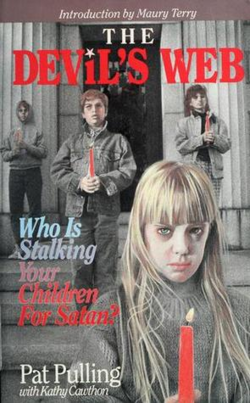 As outlined in the first part of this article, the popular rumours smearing Dungeons & Dragons were largely driven by the James Dallas Egbert III case, but soon took on a life of their own. It would take other hands, however, to really bring them to the absurd pitch that they’d reach during the Satanic Panic – and the primary driver of that process was Patricia Pulling.

You can see Pulling as the David Icke of Dungeons & Dragons conspiracy theories: many of her ideas were parroted from others, her credentials and competence as a researcher and investigator were wildly overstated, and she’s mostly notable for weaving all of the different theories she picked up from others into a dizzyingly paranoid collage, a fear-riddled look at the world in which almost anything she didn’t approve of was part of a grand conspiracy to destroy America’s children.

The major difference between Pulling and Icke is this: in Britain we laugh at our extreme conspiracy theorists, in America they get elected President. Whilst Pulling never attained quite that level of power she did end up with an undue level of influence – particularly within police forces which turned to her as a consultant on “occult crime” – which resulted in her being treated as an expert in criminal cases when in fact her credentials were not up to snuff. (If you want an illustration of how dangerous it is to have unqualified amateurs posing as experts and hyping their personal conspiracy theories to the police, you could do a lot worse than doing some Googling on the subject of the West Memphis Three.)