JFK is the eternal president of the conspiracy theory community. Whilst conspiracy theories had been rife in American culture before his assassination – much of the entire previous decade had involved much fretting about the global Communist menace on the part of citizens and senators alike – the Kennedy assassination is perhaps the first such event which, thanks in part to the mass media age, almost instantaneously spawned its own subculture that could be described as a 9/11-style truth movement. You didn’t have World War II Truthers, after all… Though I guess the early Christians could be regarded as Crucifixion Truthers.

One of the heretical early gospels of JFK assassination theories is the famed Gemstone File. Supposedly a mass of letters written by the mysterious Bruce Roberts, the Gemstone File came to the public consciousness largely through Mae Brussell’s radio show, Roberts having given Brussell copies of the letters because he thought the conspiracy he’d stumbled on was responsible for killing one of Brussell’s daughters in a car accident.

Brussell was the queen of the conspiracy theorists back in the 1970s, offering a left-wing point of view which seemed all too plausible in the days of COINTELPRO and Watergate. After Brussell’s death, her voluminous papers ended up divided among various parties, and the original Gemstone File dropped out of sight – but as we shall see, a paraphrased summary of its contents circulated at first as mass-photocopied samizdat and eventually as a text file on the early Internet. 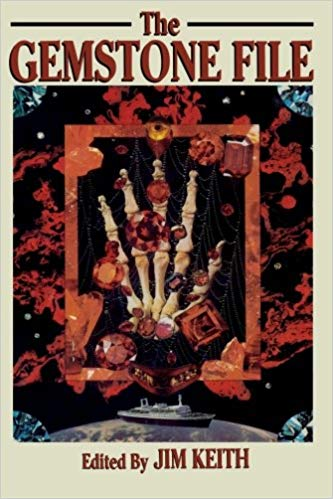 Come 1992 and the Gemstone File would become the subject of a book by Jim Keith – maverick conspiracy researcher and all round libertarian counter-culture dude. (He strikes me as the sort of libertarian less prone to Pinochet-inspired helicopter memes and who’s more keen on legalising weed.) Keith himself would become the focus of various conspiracy theories after he died in 1999 after complications arising from knee surgery, Keith having injured himself falling off a stage at Burning Man. (I told you he was a counter-culture dude.) Before that happened, though, he was an ex-Scientologist who, after dropping out of the Church, created the underground zine Dharma Combat, and for a space of time in the 1990s produced some of the most way-out-there conspiracy theory books you could hope for. The Gemstone File was his first book, largely a collection of key Gemstone-related texts and commentary thereon by various hands.