Sons of Dorn is a Black Library novel with a mighty legacy to live up to. Written by Chris Roberson, it is (to my knowledge) the first Warhammer 40,000 novel to focus on the Imperial Fists Chapter of the Space Marines since Ian Watson’s classic Space Marine. The cover proudly proclaims it to be “an Imperial Fists novel”, which makes me wonder whether it is meant to be the first part of the series. If that is the case, Roberson seems to have done his research; apparently he read Space Marine carefully before he started off, and the prior novel seems to have been a major influence. Space Marine, in summary, is the story of three lads from different social classes who came into conflict on their homeworld, but ended up being recruited into the Imperial Fists and training together, undergoing the experience of being Scouts and eventually graduating from that to becoming fully-fledged Marines; the story is notable mainly for the fact that it was dripping with homoeroticism to the point of self-parody, with scenes involving men bound in skintight bodysuits reaching ecstasy through pain and young recruits bending over so the Sergeant can brand a Fist logo on their buttocks. 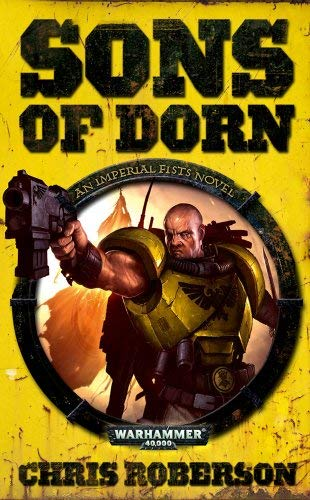 Immobilised and rendered mute as he was, Zatori had not even attempted to cry out in pain as they inserted metal probes into his every orifice, everything from long snaking coils to metal rods to others in shapes stranger still.

OK, there’s that. And the pain glove is still present, and is still a skintight bodysuit that you wear whilst lashed to a metal frame. And two of the Space Marines are referred to as bickering constantly despite being the best of friends, calling to mind the cliches about old married couple. But whilst there’s space to interpret the Imperial Fists chapter as a sweaty hotbed of barely-concealed masochism, with the great emphasis placed on pain as both a punishment for transgression and as a route to spiritual ecstasy, and whilst you could very easily imagine various relationships between the various characters if you were of a mind to, the text is in no way as relentlessly Freudian as Ian Watson’s.