Normally, with fantasy trilogies, I’d do a Reading Canary article and read several of the books to get an overview of the thing as a whole and leave a nice clear marker where the series becomes no longer worth following, but Richard Morgan’s A Land Hit For Heroes series leaves me with a conundrum. It’s nothing to do with the fact that only the first book, The Steel Remains, has been published to date; if I loved it, I’d just write a review and sit on it until the rest of the series came out and I’d had a chance to read it, and if I hated it I’d declare it shit and forget about it. The thing is that whilst I did find a lot to like about it, I honestly don’t know whether I’d recommend it or not. I don’t know whether I enjoyed the book, I don’t know whether I want to keep reading the series – I just don’t know. In principle, I would absolutely love it. But Richard Morgan’s attitude and style are so incredibly abrasive I have serious trouble getting past it. 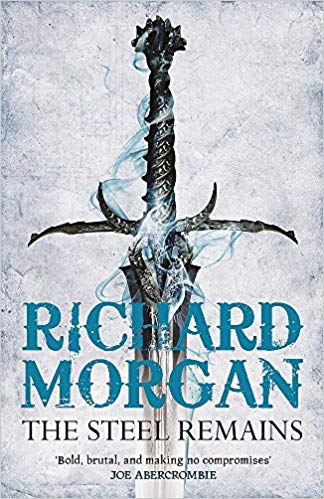 The novel is set in a fairly simplistic fantasy world whether there are three major cultures – the Majak steppe-nomads in the far north, a harsh monotheistic Empire in the south, and a Renaissance Europe-themed confederation of merchantile cities squeezed between the two more or less. The Trelayne League and the Yhelteth Empire – plus a horde of Majak mercenaries working for both of them – are arch-rivals, but joined forces some years ago to fight an incursion of serpent people which threatened to annihilate humanity altogether (especially since the lizardfolk had dragons in tow); each of the three protagonists of the novel are heroes of that war. Egar, one of the few people to have killed a dragon in the war, went home to the steppe after retiring from mercenary work, and at the start of the novel is the chief of his clan. Archeth is notable as being the last remaining Kiriath in the world, the Kiriath having been dark-skinned possibly-not-human people who commanded extremely advanced technology which they could use to travel between dimensions (although with great difficulty); since the war she has worked as an advisor to the Yhelteth Emperor, having been left behind when the rest of the Kiriath left this dimension at the end of the war.