Police-themed action movies issued forth like a flood in the 1980s, and it’s hard to find any of them that don’t owe at least a little something to Dirty Harry. Essentially an attempt to transfer Clint Eastwood’s steely persona honed via his work in Westerns into a modern-day San Francisco context, at their best the movies were controversial for all the right reasons – raising questions about police brutality and the rule of law which, despite knee-jerk reactions in some quarters, the movies were handling with more nuance and less simplistically than they were given credit for. At worst, they replicated the worst excesses of their imitators. How did they lose their way? Let’s see if we can find out. 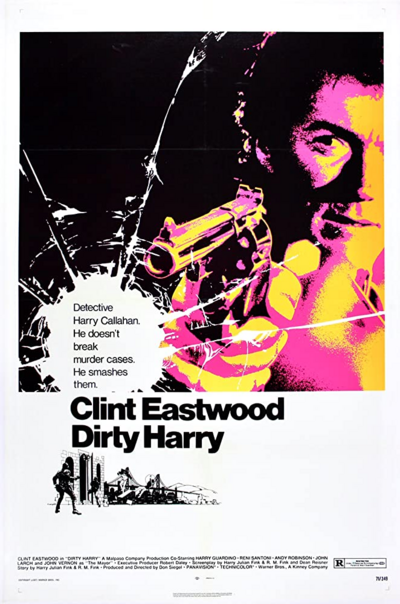 Give the original Dirty Harry this much: it’s not at all coy about where it’s coming from, displaying its colours on its sleeve when at the beginning it shows a memorial to San Francisco police department officers killed in the line of duty, effectively dedicating the film to them.

From that opening shot we fade in to our antagonist – Scorpio (Andy Robinson), a character inspired by the Zodiac Killer’s apparently random murders and his taunting of police. Scorpio uses a silenced sniper rifle to observe a random woman in a rooftop pool; after leching over her through the scope, he shoots her dead for the sheer fun of it. Cut to “Dirty” Harry Callahan (Clint Eastwood) arriving on the crims scene, sussing out where the sniper’s nest must have been, and getting down to some hard-edged police work with a funk soundtrack…