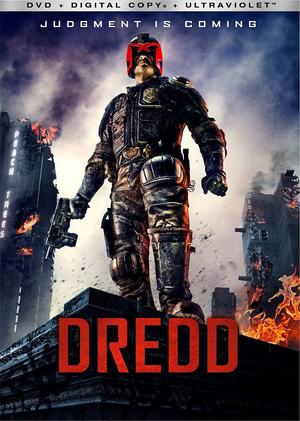 After an apocalyptic war, humanity clusters together in Mega-Cities, extremely high-density settlements which, whilst nightmarishly crowded, authoritarian and polluted, still represent a better shot at life than trying to eke out an existence in the irradiated Cursed Earth. Mega-City One is, in principle, ruled by the steel grip of the Judges – though in actuality they are hopelessly outnumbered, with only 6% of crime reports getting investigated. The end result is a world where crime can thrive so long as it stays under the radar, but gets ruthlessly rooted out once it slips from the 94% to the 6% category.

Judge Dredd (Karl Urban) is a veteran; his years of experience could land him among the leadership of the Justice Department if he fancied a desk job, but the patrol beat is where is heart lies, and he’s the best at it. That’s why the Chief Judge (Rakie Ayola) has called him in for a special task. Rookie Cassandra Anderson (Olivia Thirlby) has struggled her way through the Academy, and has ended up 3% short of a pass mark. Any other candidate would have been released under such circumstances – but Anderson’s struggles may relate to the very skills which make her of vital use to the Justice Department. You see, Anderson is a powerful telepath, whose mind-reading powers may be a boon to the department even as they give her a shade more empathy than your typical Judge.

END_OF_DOCUMENT_TOKEN_TO_BE_REPLACED

2000 AD is a unique cultural institution: a weekly SF/fantasy comic which has hosted a wide variety of strips and stories for over 30 years which hasn’t turned into a continuity-infested sack of shit, and refuses to run franchise-wide event comics of the likes of DC Comics’ Final Crisis or Marvel’s Civil War. It helps, of course, that the various series that 2000 AD hosts aren’t shoehorned into a single multiverse (although crossovers can and do happen if the writers feel like it), but I feel that the real secret of the magazine’s success is an editorial policy of not letting butter-drenched arguments about what colour Judge Death’s underwear is get in the way of a good story. “Canon” is not fetishised, and an in-depth knowledge of canon is not required of the reader; whilst there are certain rules and conventions to writing Judge Dredd (for example) which you don’t break, individual Dredd stories simply need to be internally consistent within themselves, rather than meshing seamlessly with every other Dredd tale that has ever been published anywhere. This lends the magazine a certain approachabiity which the major DC and Marvel titles lack; you can just pick it up and start following it any time you like (as I did when I was 11, and as I’ve done again recently now that I’ve rediscovered its charms).

At the same time, of course, some of the archival tales of the Galaxy’s Greatest Magazine are really quite good, and don’t deserve to linger in the vaults – and when said magazine’s been running for decades, some of those stories get quite long. With trade paperback compilations becoming an increasingly important part of every comic publisher’s portfolio, it was inevitable that 2000 AD would turn its hand to producing phone book-sized reprints of the magazine’s more famous, older, and longer stories. And thanks to a special offer at my local Border’s outlet and the very reasonable price of the reprints in question (£13.99 each for most of them, £18.99 where there’s a significant amount of colour material being reprinted, and 2-3 times the number of pages you’d get from other, comparably priced trade paperbacks) I snapped some up recently. Here’s my thoughts on the first volumes of the Judge Dredd, Strontium Dog, and Nemesis the Warlock reprints.