Though I found that South of the Border, West of the Sun often dragged when I read it, I found it intriguing enough to want to read more Murakami – especially since I found that the book went much more smoothly once it was voted out and I could just sit down and tear through it, a fairly clear sign that the one-chapter-per-week format wasn’t quite right for the material in its case. After Dark is comparatively recent Murakami (originally published in 2004, English translation came out in 2007), and is the first one I’ve read since the competition ended, so I’ve no idea whether it’s representative of the general direction his writing has evolved in since South of the Border. It’s much like that novel in that it’s a blissfully short piece about alienation and loneliness in modern Japan shot through with magical realism, except I like it a lot better because it wears its high-weirdness heart on its sleeve and has a more developed cast of characters than the extremely self-absorbed Hajime of South of the Border and the people in his narrative that he chose to focus on. 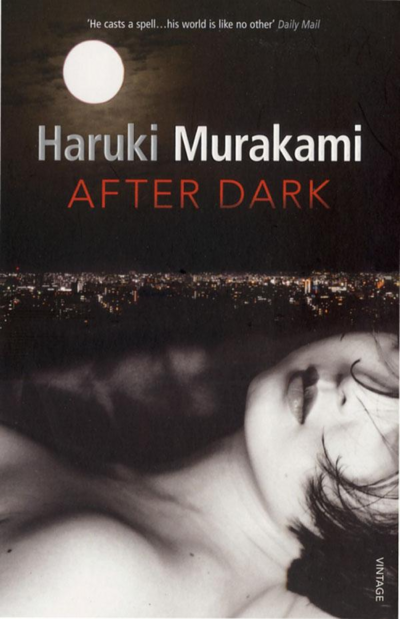 The novel unfolds over the course of a single night, from just before midnight to shortly before dawn, with most of the action taking place in a somewhat seedy entertainment district of Tokyo. Young university student Mari, in the grip of insomnia, is spending the night studying at a Denny’s when Takahashi, a trombone-playing student that she had met briefly some time before approaches her and strikes up a conversation. A little later in the evening Mari is accosted by Kaoru, an acquaintance of Takahashi’s who manages a nearby “love hotel” – as far as I can tell, such things are Japanese equivalents of the sort of sleazy motel you always see Americans renting rooms at in order to have torrid affairs in TV shows, only they aren’t so coy about their purpose. A Chinese prostitute, Guo Dongli has been assaulted by a customer back at the love hotel, and Kaoru knows (via Takahashi) that Mari speaks Chinese and can therefore talk to Guo and find out what happened.

Hesitantly, Mari agrees to help, a decision which enmeshes both her and Takahashi in a series of encounters with the nocturnal denizens of the entertainment district over the course of the night, during which Mari and Takahashi establish a curious sort of bond. As we follow Takahashi, Mari, Kaoru and others through their nocturnal perambulations, back home Mari’s sister Eri sleeps – and has been sleeping continuously for two months. At midnight, the unplugged television in her room turns on and tunes to a mysterious channel, through which a mysterious force reaches forth to drag her into a world inside the televisi- ooooooh, so that’s where Atlus got the idea from… (Seriously, Eri’s even a model who’s all stressed about how her job just puts her out there for people to lech over and objectify, just like Rise.)

Given the high-weirdness premise I’m not sure I can give a particularly compelling analysis of the book based on one reading, or even articulate a response beyond “it’s quite good I like it”, but the overriding theme seems to be the importance of memory and of reaching out and making contact with people while you still have the opportunity. Takahashi, Mari and Kaoru all have regrets and bad times that they don’t like to recall, but as Takahashi observes it could be that being able and willing to draw on your memories is vital to survival as a sane human being. It’s through recalling times when she was close to Eri that Mari is able to reconsider the distance she’s created between herself and her sister, which seems to be essential to drawing Eri out of the state she’s in during the novel. The chain of coincidences and encounters that make up the story is kicked off precisely because Takahashi remembered meeting Mari previously, and therefore struck up a conversation with her, and it’s because Takahashi is so willing to share his recollections of past events in his life – many of which are quite sad – that he comes across as charming and honest as he does.

It’s consistently through recollection and reminiscence that people are drawn together in After Dark; every friendship that Mari makes that night is based on someone reminiscing with her, whether it’s Takahashi talking about his dad going to jail or Kaoru thinking about her former career as a professional wrestler or Guo recounting what happened to her. The converse of this is demonstrated by Shirakawa, the workaholic salaryman who assaults Guo, who divests himself of most of the evidence on his way home and by the end of the novel appears to have forgotten all about the incident. Living entirely in the present, Shirakawa lives a nocturnal life where he never really sees his family, and in ditching the evidence he also throws away the cellphone he stole from Guo – which means that when the Chinese gangsters telephone him to threaten him about it, he doesn’t get the warning. The threats they give – “You might forget what you did, but we will never forget” – underscore the point that in disavowing his past all Shirakawa has done is make himself entirely ignorant of what’s creeping up behind him. The other shoe never drops on this particular strand – the novel stops rather abruptly, as dawn comes – but I was left with the impression that Shirakawa was in for trouble sooner rather than later.

On balance, I’m very pleased with After Dark and I’m glad I picked it up, and I’m more likely to revisit it for another delve into its mysteries than South of the Border. I think the crucial difference is that Murakami made me care about all the characters in this one, whereas I couldn’t bring myself to care much about Hajime in South of the Border, and I don’t think I’d have cared much even if the chapters weren’t being rationed.