A survival horror game with three different names, depending on what region you are in, Project Zero, as its known to us Europeans (our friends across the Atlantic call it Fatal Frame, whilst the Japanese just call it Zero) is in many respects a very standard survival horror game, which can trace its roots back via Silent Hill and the original Resident Evil to Alone In the Dark. The gameplay is much the same as those previous games: you wander around a haunted mansion finding clues and solving puzzles, and occasionally have to get involved in difficult and dangerous combat against the horrific denizens of the manor. 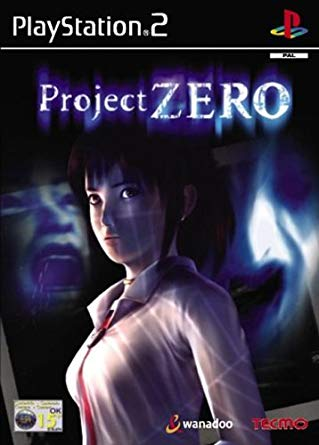 The major innovation of Fatal Frame is its embrace of J-Horror tropes and themes. Whereas Alone In the Dark was based on Lovecraftian horror, Resident Evil took its lead from George Romero (in particular, the opening sequences of Dawn of the Dead, with SWAT teams fighting zombies), and Silent Hill acknowledges the influence of a host of Western authors, Fatal Frame takes its lead from the recent renaissance in Japanese horror (which us Westerners finally picked up on with the international success of Ring), taking its themes and motifs from classic Japanese folklore and ghost stories and presenting them with a modern aesthetic.

The basic premise is simple: when a horror author, his editor and his secretary attempted to solve the mysteries surrounding the abandoned Himuro Mansion, they disappeared without a trace, and soon Mafuyu, a young protege of the author, vanishes when he goes to the Mansion to search for them. You play Miku Hinasaki, Mafuyu’s schoolgirl sister (yes, she does wear her uniform throughout the game), who must venture into the Mansion, discover its sad and horrific past, put its ghosts to rest and find Mafuyu, if he’s even still alive. The twist is that you can’t fight the ghosts through conventional means; instead, you must use an enchanted antique camera, which once belonged to your mother (who you’ve also inherited psychic powers from) in order to photograph the ghosts and drain their essence, before they drain yours.

The camera-based combat system is an elegant solution to the usual problem survival horror games face – namely, that if combat becomes too easy, the monsters are no longer scary, but if the fighting is too difficult then repeated saving and reloading wrecks any pacing the game was trying to establish, which is equally fatal to the mood a horror game must strive to establish and maintain. Project Zero embraces the solution suggested by Shamus Young in one of his posts on the subject: fighting the ghosts seems difficult and dangerous, even though it’s actually quite hard to get killed. They fade in and out of visibility, they swoop back and forth, and to top it all off you do the most damage to them when they are just about to attack you, forcing the player to wait patiently as the ghost moves inexorably towards Miko; at the same time, healing items and protective charms are scattered about the place, and it should be nigh-impossible for you to run out of film if you are at all competent. The camera is also important in solving some puzzles, as well as being a generally useful for exploration; as with every other game in this vein, you don’t get to control the camera angles in the usual third-person exploration mode (the right analogue stick instead makes Miko wave her flashlight around, which is a nice touch), and the camera angles are usually dramatic and spooky rather than useful, but if you want to take a close look at a particular bit of the room you always have the option of switching to the camera and getting a first-person view.

The game is too smart to rely on the camera combat to provide the scares, however; both frightening cut scenes and sudden shocks as you explore the game are tossed in to spook the player. At the same time, though, the game does a great job of keeping you on-target – everything seems to conspire to draw you further into the plot and further from safety as you get deeper and deeper into the house, which seems to slowly repair itself as you are drawn back in time to the inception of the haunting. In each of the game’s four chapters you have to learn again how to navigate through the house, as doors lock and unlock according to the ghosts’ whims. The plot is also strong enough to maintain the player’s curiosity; any good haunted house should have a litany of tragedy and woe in its history, and the Himuro Mansion is no exception. As you progress the game you learn more and more of the Mansion’s mysteries, even as you begin to suspect you’re being groomed to become yet another victim of them, and clues are proved through a variety of means – through photos, through documents you discover, and through cassette tapes you can play on a tape recorder you discover in an early stage of the game. (The English voice acting is abysmal, with the sort of flat, emotionless delivery we’ve become far too used to, but oddly that very tone becomes eerily effective on the tapes). A nice touch is the correlation chart that builds up as you discover clues, a diagram of the relationships between the various groups and people you learn about as the story progresses.

I do have a few criticisms of the game – some of the revelations fall flat because if you even pay a fraction of attention to the clues, you’ve already worked them out by the time they are revealed, and the last phases of the game seem to suffer from a little padding, as if the designers realise they don’t quite have enough ideas to fill all the chapters, but these are minor quibbles; the game manages to maintain an air of constant dread throughout, especially as you head towards the final confrontation knowing you still haven’t quite found all the pieces of the artefact you need to win the day. The game has multiple endings, but they don’t vary enough to merit replays in my opinion, and the game is quite short – I completed it in less than 8 hours – although that’s arguably necessary for survival horror, since maintaining a horrific atmosphere for 20+ hours is nigh-impossible. In terms of play time, it might not provide the best value, but in terms of atmosphere it’s exceptional, easily on a par with Silent Hill 2 (my personal standard by which survival horror is judged). Seek it out on PS2 or XBox without delay.

4 thoughts on “Photos of Ghosts”