The Warhammer Horror line continues its second wave with Castle of Blood by C.L. Werner, the first full-length novel in the line to be based in the Age of Sigmar setting. The premise is pretty simple: the ancient Count Wulfsige von Koeterberg has lived for years in isolation in his castle of Mhurghast, overlooking the town of Ravensbach. Decades ago, Count Wulfsige’s errant son died, and since then the Count has been stewing in his own resentment of those he deems responsible, and has been making his plans for revenge. 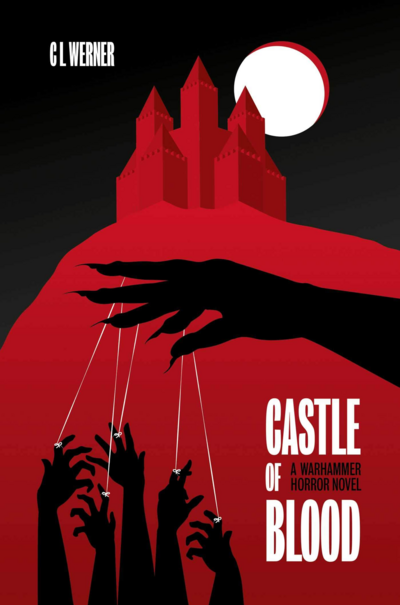 That revenge is announced at a dinner party he calls at Mhurghast, to which he summons his intended victims – and their children, all of whom are adults of about the age that young von Koeterberg was when he died, give or take. That’s important for the Count’s plan – for, by arranging the dinner in a ritual fashion, he ensures that the children become acceptable vessals for a dire demon of Khorne – a spirit of mass murder and destruction, forcing the parents into a terrible situation where once the demon is unleashed they’ll be forced to kill their own children in self-defence or face destruction at the hands of their offspring.

Meanwhile, the Count has made sure that the local temple of Sigmar has been tipped off that a demon-summoning has occurred at the castle and anyone leaving the premises might be possessed or tainted, so nobody can leave Mhurghast without being shot down by the cordon the Sigmarites rapidly establish. Can Magda Hausler, the sword-toting daughter of an alcoholic weaponsmith and a promiscuous social climber, and her new buddy Bernger Walkenhorst, petty thief and son of a formerly-corrupt merchant and militia officer, find a way to survive the night? Is it even a good idea for them to survive? Is the demon even among them, or has the ritual gone awry? And if they really are clean, can they convince the religious fanatics guarding the castle of that?

In Castle of Blood Werner’s working with a concept which, whilst it can work in a novel format, feels like it doesn’t work in this novel and might be better suited for B-movie material. The thing which stops it working is that the cast of characters is entirely too big – the Count invites some 22 guests to his dinner, there’s additional supporting characters besides them, and in a novel some 221 pages long there is simply no way more than a fraction of those characters can get a decent amount of spotlight time. (And that’s 221 pages with reasonably generous margins and line spacing and font size at that.)

Moreover, I found myself constantly flipping to the dramatis personae at the front to remind myself of who all the guests were, because only a fraction of them were described distinctively enough or given enough to do in the text to be really memorable. Now, in a movie this is less of a problem than in a book; a film can have background characters who stick around in the background and don’t do very much beyond providing kill fodder. But in a novel which asks us to keep dozens of names straight, but only really bothers to focus on a fraction of those names, this is just annoying: the reader is being asked to keep far too much straight for far too little payoff, particularly since once the demon is evoked the rest of the novel, so far as I can tell, is a fairly predictable stalk-and-slash affair.

I say “so far as I can tell” because I stopped reading about 70 pages in. (I maintain that it is still legitimate to review the book on this basis; if the first third of a meal is lukewarm and bland and loses your interest it is a bad meal, if the first third of a movie puts you to sleep then it’s not a very good movie, if a novel only really gets good after you’ve gone more than a third of the way into it the first third was wasting your time.) It wasn’t just the excess cast that annoyed me, mind; there’s other flaws with the book worth commenting on.

For instance, the plot seems to assume some incredibly specific cultural norms that I’m not sure necessarily apply in the Age of Sigmar setting, let alone real life. What, pray tell, would the Count have done had any of his revenge targets not had children? It seems incredibly convenient that every single person on his enemies list happened to have a child of an appropriate age to come to the dinner party, and who was on good enough terms with their parent (or sufficiently under the thumb) that they could be relied on to show up rather than blowing off the party.

On top of that, Werner seems to assume some decidedly old-fashioned social norms in a setting which, so far as I can tell, has absolutely no basis for them. There’s no gay marriage or other families operating on assumptions beyond “cishet nuclear family” that I could discern here, for one thing, but perhaps even more startlingly Werner seems to import into the Age of Sigmar setting assumptions of a sexist society that has no basis in the source material.

For instance, Magda bickers with her mother about not being allowed to wear a sword with her classy dress to the dinner party, and it’s evident that women are expected to go unarmed but men can wear their swords with their formal attire. For that matter, Magda’s mother does pester her to a certain extent about her marital prospects, and also appears to have lived a life intended to win her a decent match and resents her current marital situation – by which I mean she is demonised as a sluttity slut-slut who in her past sluttily slutted herself about to socially advance herself sluttily, and good golly Werner has a deep bucket of slut-shaming to pour all over her.

I admit I have not read into the Age of Sigmar setting very deeply, but what I have read of it seems to lack any sort of basis either for the sort of gender discrimination involved in the disparity between armed women being inappropriate in a formal setting whilst armed men are accepted, or for a social setup where women who want to socially advance themselves need to do it by marrying well or judiciously selecting the right men to sleep with rather than being badasses in their own right.

It looks particularly bad when you contrast this with some of the new material which Cubicle 7 are producing for the new edition of Warhammer Fantasy Roleplay, in which the core book explicitly states that all professions are equally open to all genders and one of the new supplements includes at least one high-status woman who is also very martial in bearing among its cast of NPCs and, for crying out loud, the core book and starter set both depict a woman dressed as a noble and carrying a sword on their front covers.

Sure, that’s based in the Old World setting of Warhammer Fantasy rather than the setting of Age of Sigmar that replaced it, but that’s what makes it worse. If Cubicle 7 can find a way to make the Old World, a setting hailing from the 1980s, free of some of the sexist baggage you might otherwise expect a fantasy setting that’s decades old to have, why is Werner trying to introduce sexism into Age of Sigmar, a comparatively fresh new setting offering a comparatively clean slate and no compelling in-setting reason for women to be considered non-combatants? (Especially in the Sigmar-worshipping human societies, given that Sigmar doesn’t seem to discriminate along gender lines when choosing mortals to elevate into Stormcast Eternals.)

The current representation of women in the human Cities of Sigmar miniatures range, so far as I can tell, is absolutely miserable and may indeed be nonexistent, but that seems to be because Games Workshop are still selling off their old stock of Empire miniatures under the Age of Sigmar heading and haven’t gotten around to bringing out a new range of Age of Sigmar-updated miniatures for the faction – you can tell because they all have the old square bases instead of round bases. Still, there’s nothing in the basic premises of the setting which seems to demand this sort of gender discrimination, and Games Workshop largely seem to be moving away from it. (The new Stormcast Eternals miniatures have a healthy contingent of women among them, for instance.)

It’s evident that Games Workshop want to make their settings less needlessly sexist (though they are still making missteps); you would think that they would want the fiction line to back them up on this. It is a shame that Castle of Blood very much does not do this.

One thought on “Age of Slasher”