The sloppy state of Italian intellectual property law and enforcement in the mid-20th Century enabled all sorts of cinematic shenanigans. For instance, Zombie Flesh Eaters was known as Zombi 2 in the Italian market and presented as a sequel to Dawn of the Dead (whose Italian release was called Zombi), and a number of movies came out presenting themselves as Zombi 3 when it became clear that there was a hungry audience for this sort of stuff.

Another example is the Django craze of the late 1960s and early 1970s. After the 1966 release of the Spaghetti Western Django, a swathe of Westerns came out capitalising on its popularity – often by just adding the name “Django” to their titles and changing nothing, which is awkward when the movies in question don’t include a character called Django (or even a character who resembles Franco Nero’s character in the original movie).

Some of these were dross, some are pretty good, and naturally any obscure movie craze from this period is going to sooner or later catch the attention of Quentin Tarantino and be recycled by him: thus, Django Unchained, with Jamie Foxx in the title character, came out in 2012, prompting in turn a brace of reissues of Django movies. Talking Pulp has produced some reviews of these, and here’s my take on two of them. 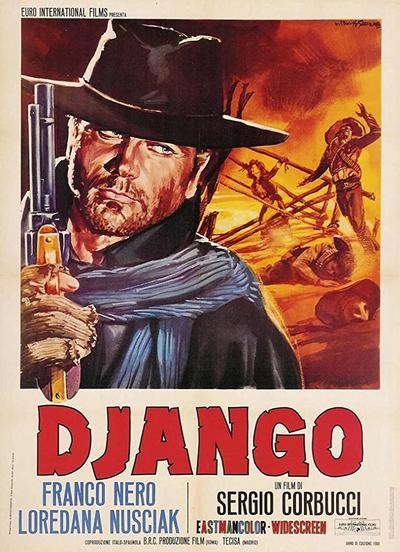 In the first Django movie the iconic character – played this time around by Franco Nero – is introduced to us as he’s dragging a coffin through mud and filth in a miserable rainstorm, wearing the remnants of a Union uniform. He encounters and rescues María (Loredana Nusciak), a prostitute who has become caught up in a conflict between Mexican bandits and the forces of Major Jackson (Eduardo Fajardo), a Confederate officer who, with the Civil War over and ol’ Dixie run down, has gone off West to fight his own private war against those he considers racially inferior.

Django keeps his past mysterious, though he notes that he fought for the North and it eventually comes out that he used to be pals with the Mexican revolutionary leader General Hugo Rodriguez (José Bódalo), and he’s here on some sort of mission of revenge – though he keeps his cards close to his chest when it comes to that. But is he a partisan here, or is he playing the old Fistful of Dollars/Yojimbo scam?

The wake of the Civil War its ugly holdouts are regular subjects for Westerns, and cast a long shadow over the history of cinemas a whole, so it’s interesting to see the depiction of the early Klan here – for Jackson’s militia is very much a Klan operation. Director Sergio Corbucci deliberately steps away from the pristine white robes and tall hoods which only became a specific Ku Klux Klan uniform after Birth of a Nation rekindled interest in the group in 1915; the original Klan, in fact, specifically didn’t have a formalised uniform, because to do so would make it more difficult to pretend that their activities were just down to random people having some high-spirited pranks as opposed to an organised hate campaign. Instead, here the Klan characters wear makeshift hoods to do their dirty work – which if anything also seems far more plausible than trying to do domestic terror actions whilst dressed in ornate robes.

Corbucci makes the wise choice to make Jackson and the Klan the primary villains of the movie, and there’s few things more satisfying than watching Django mow down Klansmen by the score. Gino Pernice also has an excellent performance as Brother Jonathan, a sinister priest who acts as Major Jackson’s spy and mouthpiece in the town.

The portrayal of General Hugo’s Mexican faction is carefully handled to make it clear that they aren’t a heroic group either, but at the same time to avoid lazy whataboutism and false equivalence; they’re bad dudes, but Jackson and others are worse. The brutal scene in which General Hugo hacks one of Brother Jonathan’s ears off and shoots him in the back makes it clear that the General has a streak of cruelty to him which can go too far, even if Brother Jonathan was clearly a horrible snake in the grass. In addition, the General’s group are treating María as property because she has mixed heritage.

By the end of the movie it is clear that Hugo’s forces are not revolutionaries in the sense of being friends of the people intent on imposing a better system, but simply a faction of the ruling class that got purged from the Mexican government, and would happily purge in turn were they to get back into power. Indeed, Major Jackson evidently not above doing business with Mexican government himself, which sets up the fantastic setpiece – the raid of the Mexican military fort where Jackson’s gold is being stored.

Django comes across largely as an attempt to do the whole Fistful of Dollars thing, but make it one notch grimmer. For one thing, Django doesn’t really give two shits about who dies or who he uses in order to get his way, and comes into this with a bloody agenda for revenge (with a side order of personal enrichment). For another, in the long run Django doesn’t save the town, he destroys it – the town was so dependent on serving both sides in the conflict that when the feud ends and factions are destroyed the town ceases to be viable and the survivors all move on. This makes for dark but effective viewing. Corbucci and Sergio Leone were actually pals, so it’s interesting to see this film as being in conversation with the Dollars trilogy. 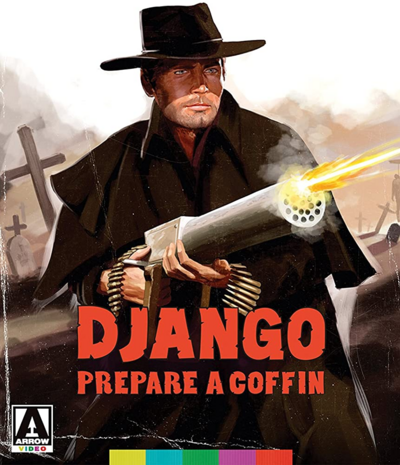 Like I said, the vast majority of the Django movies which followed the original were not in any respect official sequels, but this 1968 release is a bit of an exception. For one thing, it hails from the same producer – Manolo Bolognini – and Franco Nero was originally meant to star in it, since it would be the third of three movies he was under contract to Bolognini to feature in – Django being the first of them. However, Nero skipped out on the contract when Hollywood came a-calling, prompting a recasting of Terence Hill in the title role. Ferdinando Baldi would be in the director’s chair.

The film presents an origin story for Django which, whilst not factually aligned with the original film, at the same time tonally resonates with it. Django is introduced to us as a friend of David Barry (Horst Frank), an up-and-coming politician. One day, Django mentions to Barry that he and his wife are going to be conveying a shipment of gold from one town to the next, and Barry arranges an ambush to steal the gold in order to fund his career – leaving Django’s wife Lucy (Angela Minervini) dead and Django as good as dead.

Django recovers, however, and starts a new career incognito as a roving hangman. This is not a random choice – he’s discovered that Barry and his co-conspirators have developed a habit of using perjury in court to get their enemies convicted and executed on false charges. Colluding with the perjured men, Django arranges for them to survive the noose, and having won their loyalty he uses them to begin a campaign of terror, as the apparently dead men attack their accusers. In the midst of all this chaos he intends to intercept the next gold raid by the Lucas Gang, Barry’s bandit accomplices, in order to take them prisoner and expose Barry. But there is no honour among thieves, and Django’s path to justice will be far more twisted than he plans.

The original Django took place in an atmosphere of constant double-crossing and amorality, a depiction of the American West not as an idealised land of true liberty but a realm of chaos where in the absence of accountable authority, petty tyranny or bloodthirsty anarchy reigned. Django, Prepare a Coffin! does at least manage to hit the same sort of tone, which is more than some unofficial movies managed. The ending constitutes a little origin story for the coffin Django is dragging at the start of the original movie – plus the contents – so whilst it does conflict with some details in that film, it does at least have respect for its most important imagery. This is more than some Django quasi-sequels could claim.

The movie’s also notable for providing an early role for George Eastman as bandit leader Lucas – leader of the crew that killed Django’s wife, and Barry’s go-to man whenever he needs something absolutely unacceptable done. As we’ve seen in his later B-movie work from the 1980s, Eastman is usually a treat in whatever he’s cast in; at worst, he’s an island of entertainment in movies which otherwise wouldn’t be worth your time, other times he’s the secret ingredient which can really tie together a movie which would otherwise be nothing to write home about, and at best, when he actually gets to feature in something good, he raises his game accordingly. That’s very much the case here, where he’s a highlight of what is already a damn good time; the conflagration that ends Lucas is one of the most horrifying sequences I’ve ever seen in a Western.

As far as Terence Hill’s performance as Django goes, it’s perfectly fine – he resembles and broadly acts like Franco Nero, at the very least, which is more than can be said for some of the other unofficial sequels. In the wake of the Tarantino movie, there’s been some interest in making the Django movies widely available, and Arrow Video stepped up to put this one out on Blu-Ray; on the whole I think they made the right call, because whilst some of the Django sequels can probably happily stay in obscurity, this one doesn’t deserve to.